Simple out and back course with no technical difficulty, just lots of hard ascents over a short distance.  The 2006 event was blessed with blue skys and perfect weather conditions. Being the last evening fell race of the season and a local clubs fell league fixture there was a large turn out and high quality field.  Derek Clutterbuck arranged lots of prizes (how does he manage this with an entry fee of only £2?) and the presentation was very well attended (over 100). The 2006 route was probably a couple of hundred yards shorter than usual due to a new path in the field at the end.

2007 update - the course was altered slightly due to fencing erected by United Utilities.  Even so the distance was unchanged and we had perfect weather once again.

2009 update - the wonderful BBQ summer of 2009 provided torrential rain before the start and hail with high winds round the course. The turnout was 86, not bad compared to the mere 33 who raced up Brown Wardle only 3 nights before.  Times were generally down under the difficult  conditions.  Afterwards, thawing out was a slow process, but it was helped along by the warm company in the Workers'  Arms and Derek's usual, generous presentation.

2010 update - much better conditions this year than '09, ideal for racing.  The race was started by the Mayor of Whitworth and the ground was soft but not too slippery.  Of the 78 finishers only 6 were ladies.

2013 update - after many years organising the race, Derek Clutterbuck handed over responsibility to Andy O'Sullivan.  This year over 120 took part, boosted by the race being part of the Stainland Lions club championship and lots of Tod Harriers.  Conditions were perfect and we were treated to a stunning sunset. Jamie Ward won the shield for being first finisher from Whitworth.  Results out within 24 hours. 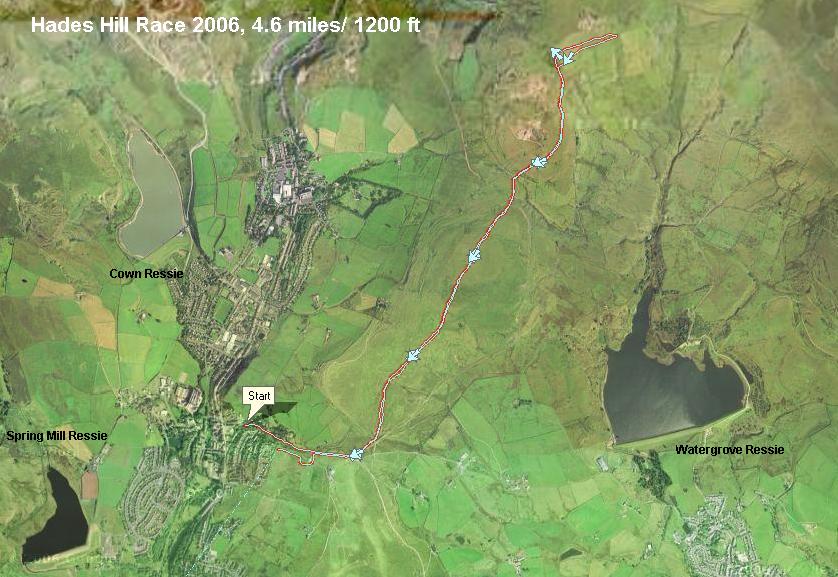